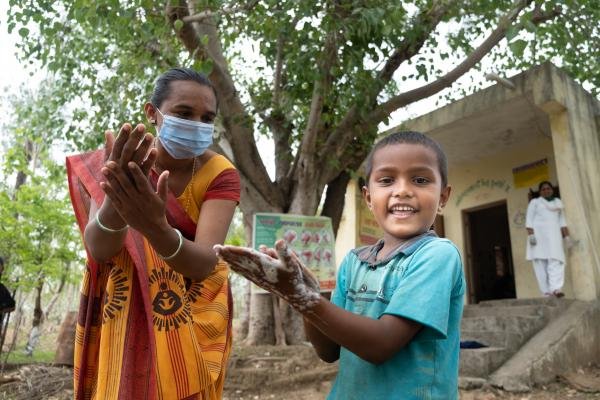 For him, building toilets is building society

48-year-old Praveen Meena who has been working with FINISH Society for over eight years started his journey as a volunteer and worker. Today, she  is a supervisor and in-charge of door-to-door collection vehicles that fall under Nagar Nigam, Udaipur. Meena who worked as an insurance agent prior to her stint in the sanitation sector, is a satisfied man. He worked towards building toilets under FS’s implementation, before being an integral member of the Solid Waste Management team. He currently manages 44 vehicles and drivers.

He says, “People from our community usually work in the agriculture sector but with the training and motivation provided by FINISH Society, I learned so much about the sanitation sector. I strongly believe there is no age to learn and  enhanced my skills thereafter.” He adds that every job has its own importance and cannot be compared with any other work.

Meena, who earned 3000-4000 rupees initially now earns around 20,000 rupees. He says that his standard of living has improved a lot and his children are getting proper education now. Other than this Meena has extensively worked with school WASH projects with equal commitment. What is noteworthy is the fact that the SWM initiative in Udaipur has broken social and caste barriers. He has no compunctions that he is now a part of the sanitation work-force, a vocation that has long been the preferred vocation of the Dalit community

Sanitation work is no less dignified than a being a homeguard

“Hard work is the mantra that helps us reach heights,” believes a young single mother of three Asha Meena. Asha is associated with FINISH Society for two years and works at the MRF (Material Recovery Facility) centre.

It was when Asha lost her husband that she decided to apply for the position of Home Guard as her husband was one too. She says, “I worked during the day, took care of my children and in-laws after going home. I completed all the household work and studied during the night.” Asha followed this norm for three to four months and qualified the entrance exam for Homeguards too. However, she left the sanitation job for a few months only to rejoin when she had worked as a Home Guard. Her confidence and self-worth can be gauged from the fact that she  “asked my senior Praveen Sir if I can join back and he was more than happy,” says Asha who loves working at the MRF centre with other workers.

She recalls that her husband used to motivate her before passing away and she joined FS immediately after his death and got the social  support she needed. This she thinks was the turning point in her life. She realized that work is worship and that caste and class are taboos that she needs to break. What further provided an enabling platform was the fact that her in-laws are very supportive and motivate her all the time.

However, the transformation as a sanitation worker was no easy task, she reveals. “Initially, I was very upset and cried in the pillow because I did not want to do the sorting job but gradually I started enjoying it. I was told that if I have to raise my children, I will have to work.”

Asha, who also belongs to the tribal community was hesitant as not many people from her community work in the sanitation sector but later she realized that this work is like any other work and put her heart and soul into it.  No work is below human dignity and working towards a circular economy gave her the freedom to think independently. The jibes and taunts she was subjected to, were just  roadblocks she had to encounter. This process helped her experience the dignity of labor and break free from the social shackles that had held her back for over two years.

in India under general category of clean cities.” He also talks about the waste management and source segregation happening in the city, adding that they have received a brilliant response from the citizens and people are cooperatingvery well. He sounds elated when he says: “It feels great to say that we have100 percent collection and transportation followed by recycling andmanagement after sorting.” He also adds that Dungarpur was the first ODF(open defecation) free city in Rajasthan. FS Project Manager, Dungarpur,Narendra Sharma says, “We would not be able to achieve this without support from the Municipal Council.”m mLegha says that the treated water may not be fit for drinking but can be used foragricultural purposes at least. One can also spot boats in the lake not just for boating and tourism but the ones with bins for regular cleaning of weeds as well.The cleaning mechanism can be explained as follows. The waste water enters the grease trap from the grit chamber/grease trap (GCGT) where settleable solids are removed by gravity which further enters the equalisation tank which is also used as the pumping tank which then enters the aeration tank containing MBBR (Moving Bed Biofilm Reactor). Aeration is provided through bubble diffusers to provide oxygen for the microbial growth to fully disperse the plastic media. The over flow from the MBBR tank enters the settling tank. Here the settling takes place and after sufficient retention time the clear water flows to the HCWL (Horizontal Constructed Wet Land). The sludge settled at the bottom is removed periodically. HCWL is an engineered mimic of a natural wetland. The mechanism of removal of pollutants in HCWL are chemical, physical and biological. After removal of suspended solids, the remaining ones are degraded biologically by bacteria attached to the reed plants like typha or phragmites and segment surfaces. Nitrogen removal in the HCWL is by using bacteria in aerobic zones to nitrates which get converted to Nitrogen by denitrifying bacteria in anoxic zones. The plants also uptake phosphorus significantly. The final result meets RPCB standards and is fit for discharge into the lake. The settled sludge from the settling tank is periodically drained with the use of a sludge pump into a sludge holding tank. The sludge can be disposed of as feed into a biogas plant or to the sanitary land fill, after moisture reduction.